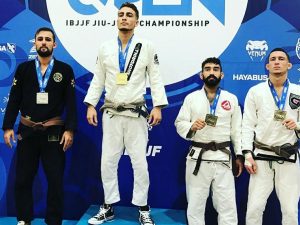 Photo courtesy of North Side BJJ

The first (partial) week of the Grappling Calendar being public is drawing to an end, as we watch snow fall in the northeast for the third time in four days. Thursday’s storm provided a much needed day off from the 9-to-5 to put the final touches on the site and unveil it to the public. After a lot of work figuring out how to build a functional website, and manually entering the details of over 100 upcoming Brazilian Jiu Jitsu tournaments across the United States, the Grappling Calendar was rolled out . I have since figured out how to automate the process a bit, to save a lot of data entry time and spare my own sanity.

So far, there has been a good amount of positive, encouraging feedback, proving  that I was not the only competitor who was looking for a simple way to keep track of upcoming events. While the site was designed to be as intuitive as possible, I will soon post a quick tutorial showing how to find events and save them to your own ical or google calendar.

Anyway, onto some jiu jitsu: Multiple tournaments took place this weekend, including Grappling Industries‘ return to Chicago. The promotion continues to show strong promise, with another well-run tournament actually finishing an hour ahead of schedule. This is a welcome change for any competitor who has spent hours waiting in a gym for their division to be called. If you plan to compete in any of their upcoming tournaments, be sure to heed their advice and get there at least an hour before your division is scheduled to start.

This weekend’s tournaments also incuded NAGA Phoenix, some submission only action at The Good Fight in Youngstown, Ohio, and two days of IBJJF action in Houston, Texas. Until next time, I will leave you with the black belt open weight finals match between Samir Chantre & Vinny Magalhaes: